Reply
This is some old stuff, but I always wanted to know what people think about it.
So please critique. 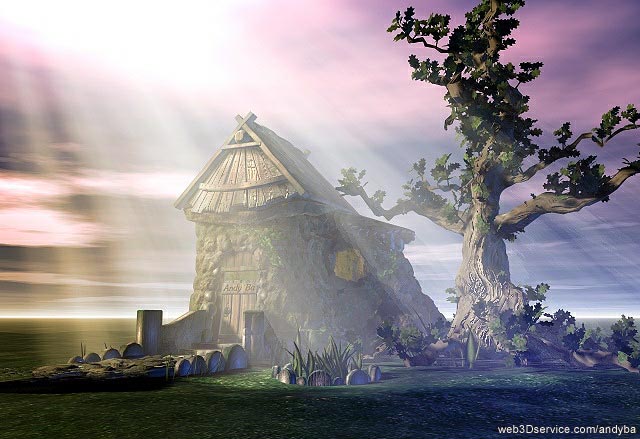 Reply
I like it... the only crit is the background is TOO empty... and too straight.
Posted: February 28, 2009
Post subject:

Reply
I would add some mountains in the background... or some more houses

Reply
Yeah the volumetrics is the only thing I like myself

Reply
Thats very beautiful, I wouldn't add mountains or houses in the background, hills might be a little closer to what you may have been aiming for. Unless you want to keep a serious theme going on with it, in which case mountains might be good.

I think houses would distract from the main area of the scene.
Posted: June 03, 2009
Post subject:

Reply
Thank you insanityprincess! And welcome to the 3d forums!

Reply
I like the house and the combination of the stones, the tree and the grass on the wall. The light is verry impressive too.
Posted: May 12, 2010
Post subject:
Trax
3d Forums Archer
Joined: 18 Mar 2010
Posts: 43
Location: Washington State

Reply
I like the house, tree, and the overall textures...pretty good. I agree add something in the background remember atmospheric perspective things further back have low detail and are less saturated. The light, in my opinion, is a bit much. Look at some photos that have sun rays I could be wrong but I don't think light rays are that bright.
Posted: May 12, 2010
Post subject:
Trax
3d Forums Archer
Joined: 18 Mar 2010
Posts: 43
Location: Washington State

Reply
I don't know if its just me, but the leaves and edges in general seem almost too sharp. Especially the leaves/grass.